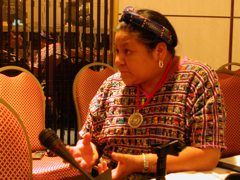 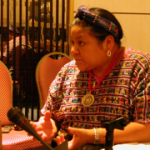 Equally at home with President Jaques Chirac and indigenous peoples from around the world, Rigoberta Menchu Tum, Nobel Laureate and activist, stands out for her uncompromising ability to build bridges and bring the issues of the poor and often forgotten peoples of the world forward with strength, dignity, and fortitude.

After the final negotiating sessions of the Summit, Menchu Tum met with the Indigenous Caucus in their outdoor meeting corral at Ubuntu village, a display area for grassroots sustainable development initiatives from around the world. Under the shade of the open- sided, circular straw roofed hut, Menchu explained the implications of the final legislation. She took questions and encouraged these local leaders who had come from the villages of Bangladesh and the remote plains of Transvaal to represent the world’s indigenous peoples.

AMY EDELSTEIN: In spite of the very disappointing legislation with respect to the protection of indigenous peoples and human rights, do you feel there’s been a change in perspective among some of the world’s leaders? For example, you met with President Chirac yesterday and spoke about some of your concerns with him. Does he seem to be more sympathetic to the issues of the indigenous people and to the necessity to protect cultural diversity as part of sustainable development? What do you think will help change the perspective of other world leaders more quickly?

Rigoberta Menchu Tum: At this time, we cannot wait for the leaders of the world to become concerned with indigenous issues; they will never come to us. But now, because I have won the Nobel Prize, I can sit at the table with these leaders. I can speak with them on our behalf and form alliances. We have to take every opportunity and form partnerships wherever we can. It will give help us have more impact. If not, our fight will be very lonely and we will not make progress.

I spoke with President Chirac about some of the global initiatives. There is an opening and friendship between us.

My goal was to make the indigenous issue a very clear point on the agenda, because we cannot assume that they will take us into account. We indigenous peoples have to fight in all ways just to be part of the process and to be considered in the decisions that are made. We need a lot of strength. It is not easy and it is not going to be easy. But I have the impression that there is more conscience than ten years ago. Ten years in Rio it was a novelty for people that we could have a pact with the future. Now it cannot only be a pact on the part of the civil society, our pact with the future must be a very wide pact, with initiatives from all sectors of society. But it is a very difficult situation in the world these days. Instead of talk of peace, there is talk about building more weapons to fight terrorism. If there is no tolerance between countries, if there is no decision not to be racists, then change for the indigenous peoples will be slow and difficult. It is very important that as poor people we do not lose our dignity. If we lose our dignity we will lose this work. It is very important not to lose our faith that we can have an impact and we can help with future development. We can save ourselves and our way of life only with the global vision that we have now. 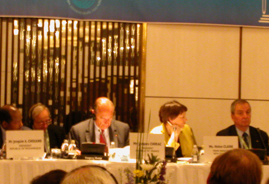 “Sustainable development is not just a technical and economic issue. It is a response to the worldwide ecological and social crisis. It is an ethical vision, confronting us with the question of the rights and duties of humankind toward nature and creation. There is nothing more foreign to the human spirit than evolution towards a uniform civilization, just as there is nothing more hostile to the movement of life than a reduction in biodiversity. How can an environmental ethics be build without taking into account not just the progress made in science but also that made in ideas on all continents, without taking advantage of the philosophies and values bequeathed to us by the great world religions?… Despite the enormous promise it holds out, globalization threatens diversity. We must take care that it does not become a force without values, with its own momentum as its only goal or it will end up impoverishing mankind. “