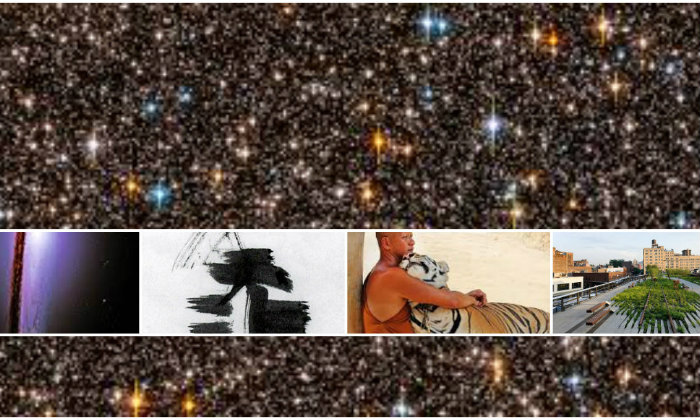 “The misconception which has haunted philosophic literature throughout the centuries is the notion of ‘independent existence.’ There is no such mode of existence; every entity is to be understood in terms of the way it is interwoven with the rest of the universe
~ Alfred North Whitehead

An Ecology of Being

Cycles, Process & A Different Way to View Ourselves in the World

Throw a stone into the stream and the ripples that propagate themselves are the beautiful type of all influence.Ralph Waldo Emerson

Recently I’ve been thinking a lot about what a truly nondual relationship to our environment would be. As a spiritual practitioner, with roots in the East and the West, I carry with me seeds and codings of a number of views of the goal of spiritual life, each with its own implied relationship to the world around us and to nature or what’s called the natural world (as if people and their creations were somehow positively distinct or pejoratively unnatural).
One of these codings is of the ultimate human attainment as a profound and conscious intimacy with what’s called Consciousness, Being, the Absolute, the Unmanifest—the Eastern view of what’s discovered when we awaken to the illusion of the separate self. I also carry with me a powerful calling to surrender, service, sanctification, devotion, and reverence towards the sparks of Divinity in all creation—the Western view of God in the world and sometimes as the natural world.
As a rationalist and a scientist’s daughter, I am imprinted with a felt sense of evolution, of the movement and fluidity of everything, from space to time to cosmos. It includes the stone table I am sitting at to the building around me, to the coffee I am nursing, to the friend I will be meeting in what’s known as a process oriented view of the world. As a humanist I carry with me the ache for justice, the felt sense and empathy for our common humanity, for new order of living together in a culture that is based on our deeper values and highest aspirations, that seeks no compromise in matters of the heart and care.
So with all these imprints, layered on top of each other like a Japanese woodcut, I have been contemplating:
What’s an evolutionary view that values our felt sense of process? The experience that we are all, always, in motion, ripples on the surface that roll into each other, the same substance meeting itself in a movement caused by another. What is a view of the natural world that does not demonize humanity for arriving on the earth’s crust and yet feels the weight of urgency to radically awaken so we can respond to the cry of our times? What’s a philosophical orientation to Life that does not blind ourselves to the possible with the brilliance of what has already been seen?

To define another being as inert or passive object is to deny its ability to actively engage us and to provoke our senses: we thus block our perceptual reciprocity with that being. By linguistically defining the surrounding world as a determinate set of objects, we cut our conscious, speaking selves off from the spontaneous life of our sensing bodies.David Abram 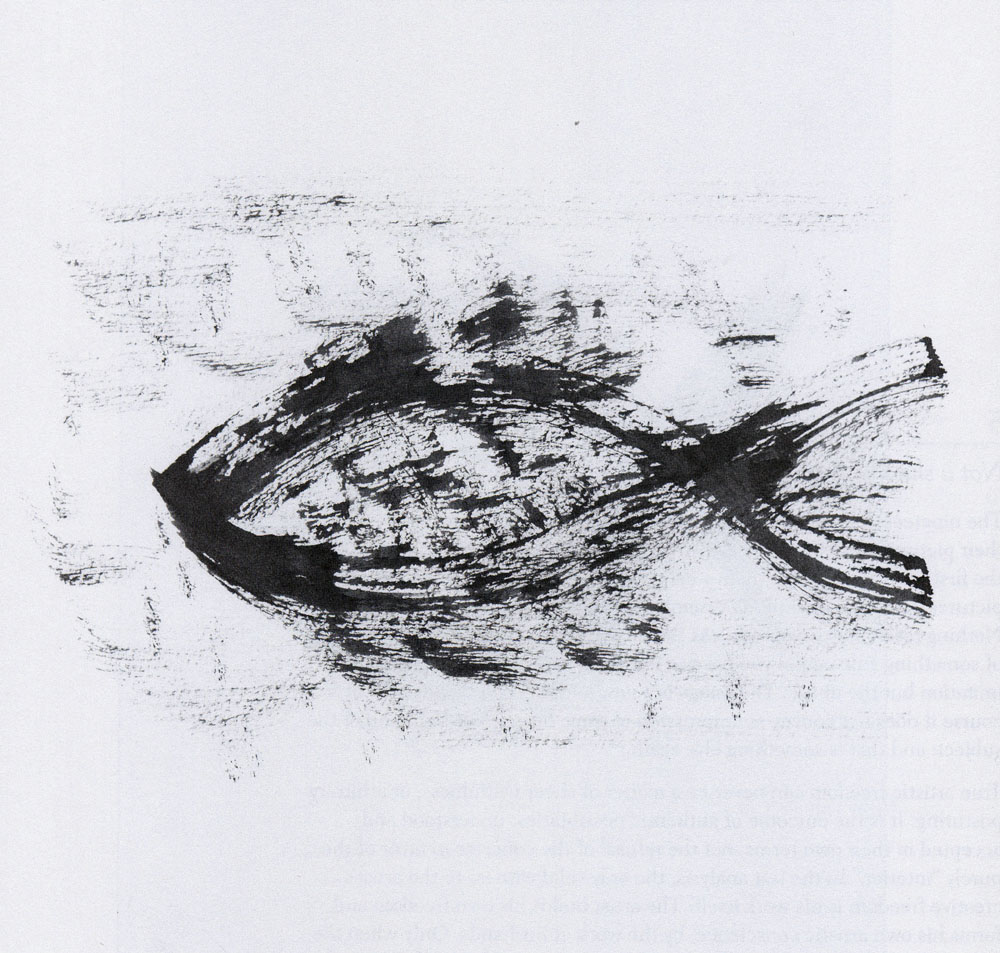 Recently I came across David Abram’s beautiful and brilliant book The Spell of the Sensuous (1996). I was corresponding with a nature philosopher and translator in Czechoslovakia, who pointed me Abram’s way. I ordered the book and then found a copy on my living room table. My husband, who is also a spiritual philosopher, was already reading it in a book study with a friend who is a frontrunner in the medical genome world. This search for a new ecology of being has made its way into my small circles, and now I am having conversations about it everywhere I turn.
What I find so compelling about Abram’s insights is his willingness to perceive the world and the order of relationship differently than we are accustomed to. We usually think of relationship as something occurring between two people. You and I, or my cat and me. But when we are in relationship with each other, we are also separately already in relationship with so much else. The temperature and I have a relationship, a light sweat breaks out over the skin of my forehead, the coolness and oldness of the stone under my hands, the smell and color of the toasting bagel, the tinkle of a key on a metal chain, my memories and associations from phone calls this morning, one to Guatemala, one to Portugal. I am already in relationship with the ideas and the communities each call associated me with—the people on the other end and the future of the projects we discussed. The technologists who invented our means of communication. The sunlight coming through the window after a long winter, warming me with its sparkle. The squirrel mischievously eyeing the tulip shoots that have newly torpedoed through the thawing earth. As Abrams describes and I have been experiencing anew, I have multiple relationships through all my senses with all these “beings” and with so many more. They in turn have relationships with me and with so many other things, seen and unseen.
Our world is a cacophony of relatedness. Of movement. Of process. As developed as our capacities are, human consciousness is only one entry point to understand and order the world around us.

[The] primordial world is always already there when we begin to reflect or philosophize. It is not a private, but a collective dimension—the common field of our lives and the other lives with which ours are entwined—and yet it is profoundly ambiguous and indeterminate, since our experience of this field is always relative to our situation within it.Abrams on the philosophy of Edmund Husserl

If our view is only one entry point, one organizing principle of the world around us, what does that mean about objectivity? What does that mean about hierarchy of view?
There are schools of thought that bias human rational cognition above any other knowing. That view relegates the senses and experience of the harmonies that can be found in the vast organicity of things (to use a Teilhardian phrase) to less than or irrelevant when measured against human cognition. That view also assesses the visions and communications of nature mystics, shamans, and tribal cultures as “primitive,” untrustworthy next to our logical rationalism.

Now, I understand the arguments and agree with what Ken Wilber so elegantly described as the Pre-Trans Fallacy (see Wilber, 1980), where we imbue a more simple or pre-rational understanding with a romantic overlay of highly developed trans-rational wisdom. And I appreciate the utility and understand the arguments that posit our ability to arrive at an objective view, where a collective can be said to see a more accurate view of a principle or an occurrence. But both beliefs have often been misconstrued and misapplied, inadvertently obscuring our ability to feel into the complexity and unsettling power of process. If we expand our view and take in the totality of the cosmos, take in the wondrous interconnectedness of deep time, vast distances, mysterious dimensions of Spirit and matter, of knowing that seems to transcend experience, of ways of interpreting the miraculous, of the communication systems of E. coli bacteria and heaving glaciers then those more linear images of development and relatedness start to chip and fracture.
Beyond the broad strokes in which a linear view of growth, experience, and relatedness makes profound sense, this linear view of the direction of evolution—and the human place at its center or tip—becomes too crude a brush with which to paint the landscape of our world, our future, and the sacred. The thin arrow of evolution becomes too limiting a device to connect us sufficiently with each other, with the natural environment around us, and with the great and mysterious cosmos. It biases too narrow a range of possibilities, obscuring a more creative communication, a more complex or multi-dimensional intermingling of energies, visions, and realities. It excludes too much of our experience and too many possibilities. No wonder we have a hard time finding the numinous, we have not sketched in all the many doorways and windows that could exist for the Life to pour through.
The question I am turning over in my own contemplation is, can we awaken to a relationship with the natural world (in which I include all things, plastics and programming, tulips and earthworms) that is fluid? That recognizes differences and hierarchies in our capacities and development without excluding the conversations and relationships coming towards us, initiated from sources (some more “primitive”) outside us? Can we awaken to and live from a vantage point that allows for shifting hierarchies, for multiple perspectives? One that rightly unseats humankind from the throne at the center of creation? As Abrams writes, “The subjective field of experience, mediated by the body, opens onto other subjectivities—other selves besides one’s own self.”
In profound awakening, we are able to be with paradox that previously couldn’t co-exist. In this new ecology of Being, can we awaken to these infinite ways of turning the jewel of Creation without flattening everything out, without losing a hierarchy of values that points us towards greater and greater heart? Greater and greater clarity of vision? Greater and greater recognition of the preciousness and sanctity of balance on a grand scale?
So many questions open as we explore the nature of an evolutionary mysticism. So many threads to reconsider as we strive to awaken to a different identification of self, and a very different order in the universe. So we seek for an understanding that shows us a more dimensional vision of harmony, a more vibrant future ideal.
May we discover a relationship to ourselves within the vast unfolding cosmos that carries with it a great Love and respect for all creation, the lowest and the highest, for there are many conversations to be had and many relationships to begin.

The rain surrounded the cabin . . . with a whole world of meaning, of secrecy, of rumor. Think of it: all that speech pouring down, selling nothing, judging nobody, drenching the thick mulch of dead leaves, soaking the trees, filling the gullies and crannies of the wood with water, washing out the places where men have stripped the hillside. . . . Nobody started it, nobody is going to stop it. It will talk as long as it wants, the rain. As long as it talks I am going to listen.Thomas Merton

One Comment on “Cycles, Process & A Different Way to View Ourselves in the World”