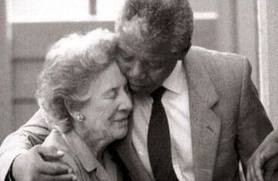 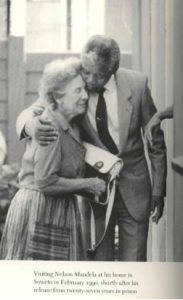 “I didn’t take any risks!” was perhaps the most provocative thing politician, social activist, and radically independent thinking Helen Suzman could have said to me. In case you are not familiar with her history and accomplishments, the late Helen Suzman, member of South African Parliament for thirty-six years, was the sole Progressive Party member in opposition to the apartheid regime and sole woman in this 165-man ruling elite body for thirteen of those years. Born in 1917, educated in economics at the University of Witwatersrand, Suzman is best known for her role driving a wedge into the foundation of one of the most inequitable social, political, and human power structures of modern times. Bold and independent, she did things no women did, and no white person did in that divided country, making optimal use of her public stature to bring about social change.
Suzman’s visits to the notorious prison on Robben Island off the Southern coast of South Africa brought the end of forced labor for political prisoners including Nelson Mandela. Her friendship with Mandela and her stand for human dignity and rights seared an international conscience. A fierce advocate for the people and for equality under law, she would attend trials of political prisoners, travel to see the conditions in squatters camps, talk with blacks who’d been harassed under pass laws or dispossessed of their land, and then take her first hand reports back to the Parliamentary floor. Ever tenacious, she didn’t hesitate to make clear her lone stand against the apartheid rule. On one such occasion, Suzman wanted to make her opposition to South Africa’s ninety-day Detention without Charge law so concrete that she got all the members of Parliament to physically divide according to their vote. She stood alone on one side of the room facing all the rest of her Parliamentarian colleagues.
In spite of her opposition to the government, she was re-elected term after term, her motto,  “I hate bullies. I stand for simple justice, equal opportunity, and human rights. The indispensable elements in a democratic society—and well worth fighting for.”After retiring from politics, at age seventy-two, just a few months before de Klerk released Mandela from prison and announced the creation of a “new South Africa,” Suzman served as President of the South African Institute of Race Relations, member of the Commission that supervised the first democratic elections, the South African Human Rights Commission, and founded the Helen Suzman Foundation for Liberal Democracy. She is the recipient of the United Nations Human Rights Award, the Liberal International Prize for Freedom, the Courageous Leadership Award and many other citations acknowledging her unique courage and contribution to the upliftment of humanity.
While many outside of South Africa may not remember her name, the photos of a small woman with a mop of curls being warmly embraced by Mandela after his release from prison stand as one of the lasting images of this turn of history. At the time of this interview, at eighty-five years old, Helen Suzman was as strongly opinionated as ever, as warmly passionate, and as encouraging of our ability to bring about significant transformation.
INTERVIEW

AMY EDELSTEIN: What was it that inspired you to take the risks that you did?

AE: But you were very outspoken about a change that was extremely threatening to the status quo. 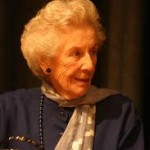 HS: Yes, but that was not a very great point! There was much more respect for the institution of Parliament than there is today and there was much more understanding of the role of an opposition. The apartheid government didn’t like me and they didn’t like what I was saying, but I was given every opportunity to say what I wanted to. Best of all, I had terrific support from the English language press, which is so vital for a politician. There were lots of people who were against apartheid, not just the activists. The English language universities were outspoken against apartheid as well as the opposition press. Those were very important factors. I mean, there were threats, and so on. But I was a duly elected Member of Parliament so that gave me a certain protection. It also gave me the right to ask to go to visit the prisons, and so on, and when I came out I could make my reports.

AE: Do you think it’s more difficult now to voice opposition to current inequitable and unsustainable power structures because—given the complexity of global development and production—there’s not as clear an opponent as the former apartheid regime?

HS: I think that’s true to some extent, as well as the fact that there are definite restrictions, at least it seems to me, placed on the press by the owners of the press here in South Africa, which didn’t happen during my era. The press seems to be reluctant to criticize as freely as they used to. Maybe I’m super sensitive to the fact that there hasn’t been strong enough criticism of the corruption or a demand that corrupt people be kicked out of office, and that there is tolerance for leaders like 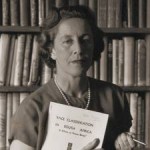 Mugabe. So it’s plus and it’s minus. I’m certainly not without hope. I’m not a great optimist but I’m certainly hopeful we can pull this country up.

AE: Do you have any advice for young South African women who are aspiring to be leaders?

HS: I think you have to get involved in politics; you can’t do it on your own. You either join a militant NGO, and there arehundreds of them in this country, or you join a political party and go actively into politics. That’s the only way you can try to influence events in this country and I think in any country. Speak out on important issues, use the press where you can, and get yourself properly informed about what’s going on, don’t just fly off the handle without verifying your facts.